Celebrate Immigrant Humor, Comedy with Laughter - 3 Tuesdays evenings, May 2, 16 & 30 at Kingston's Old Dutch ChurchWhat’s so funny about Tuesday Nights?  Expressions of immigrant experiences, narratives of displacement, and struggles with acculturation will be explored with humor, comedy and laughter on Tuesdays May 2, 16 and 30, 7pm at the Old Dutch Church in Kingston, NY.  Year II of “Immigrant Gifts to America,” presented by the Reher Center for Immigrant Culture and History, offers two very funny romantic comedies and a night of live stand-up. Admission is free and donations to offset expenses are welcome.  Program details are below and available at rehercenter.org orinfo.rehercenter@gmail.com, or call 845-338-8131. The Reher Center is a project of the Jewish Federation of Ulster County. Series sponsors include Chronogram magazine and the Hudson Valley Federal Credit Union.  May 2 – Film Screening: “My Big Fat Greek Wedding” The 2002 romantic comedy film was directed by Joel Zwick and written by Nia Vardalos, who also stars in the film as Fotoula “Toula” Portokalos, a middle-classGreek-American woman who falls in love with a non-Greek upper-middle-class “white Anglo-Saxon Protestant,” Ian Miller. May 16 – A Night of Stand-Up With Laughter Provocateurs:Mikhail Horowitz and Gilles Malkine - Their comedy performance art, spanning 26 years, includes music, poetry, parody, satire, songs and theatrical skits. They have recorded and coproduced three albums and a DVD titled “Too Small to Fail.” Henry Liu -a first-generation Chinese-American attorney in Kingston, was born in NY and has been seeking to balance fitting into the American way of life while trying to maintain his Chinese identity. He tried stand-up comedy for the first time during his last year of law school and has been hooked on it ever since. Jared Whiteford – an aspiring comedian, works as an educator at the Northeast Center for Rehabilitation and Brain Injury in Lake Katrine.Thomas Bachman – Based in western Massachusetts, he has honed his craft in Paris, Nepal and Vietnam, as well as in the Northeast USA.May 30 – Film Screening: “The Wedding Banquet”  Director Ang Lee’s 1993 film tells of a gay immigrant in New York who stages a marriage of convenience with a woman to satisfy his traditional Taiwanese family, but things get hilariously out of hand when his parents fly in for the wedding. 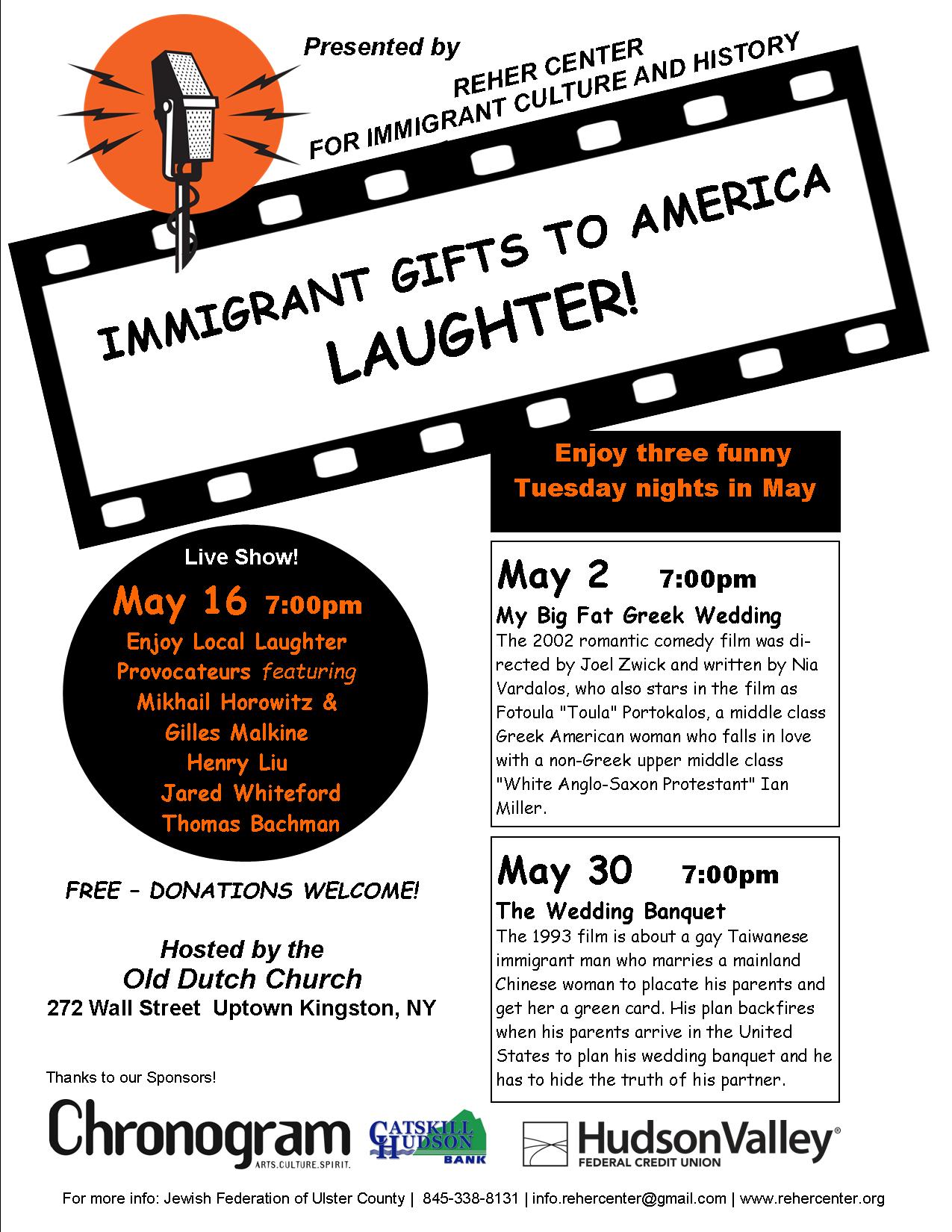